Well, I had decided on a topic but hadn’t yet settled on a person to concentrate on. I’ve been looking at the Astor Place Riot of 1849.  I was attracted to it because of the issues involving class structure that led up to such violence. Basically what happened was that two famous Shakespearean actors were pitted against each other because they’d come to represent the privileged elite on one side and the common working man on the other.

William Charles Macready was an English traditionalist when it came to performing and Edwin Forrest became popular by performing in a less formal American style.  When Macready was headlining, the Astor Place Opera House began requiring a dress code including kid gloves and they charged a much higher entrance fee for exclusionary purposes. Because of this, Macready’s performance becomes representative of aristocratic privilege and oppression of American laborers. There is a very public back-and-forth between the actors in the newspapers, and eventually things became so heated that a riot ensued.

I was surprised to learn that this wasn’t really atypical. Supposedly, riots were generally planned ahead of time. Here’s a flyer for this particular one:

What’s different about the Astor Place riot is that it turned out to be very deadly because the recently-formed police force and state militia (that were controlled by the powerful elite) was given access to and instructed to use their weapons. This was the first time government authorities had ever fired live ammunition into a crowd of citizens in this country, and this was the result: 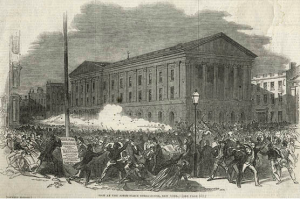 As I said earlier, I haven’t necessarily decided on a specific person to focus on, but I’m leaning towards Edwin Forrest, the American actor.

He was supposed to be popular partly due to his rugged good looks. 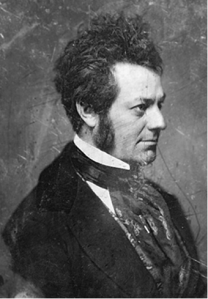