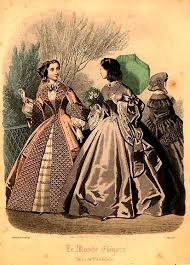 In the book, Mothers of Invention, written by Drew Gilpin Faust, she writes of how females of the southern elite were taught that to be a woman of the elite required the presence of slaves to perform menial labor and white males to provide protection and support.  Lady, a term central to their self-conception, was founded upon race, most especially whiteness.

Caroline Merrick was born into this fabric of southern society with an innate love of liberty as apparent in her remarks as a young girl as well as her fight for suffrage in her sunset days.  She did, however, at the same time, remain compliant to expectations of what it meant to be a Southern woman.  In reading Caroline’s memoirs, we experience these times through her perspective which seemed realistic but she presents a somewhat sterile view.  However, as the men went to war, many women who were left behind  became completely redefined by their experiences of the war and it wasn’t pretty.  These are just some of the issues Faust talks about in her book, Mothers of Invention.

First, it is important to remember white southern women of means were raised to be obedient to the male hierarchy that this was crucial to the whole of slavery.  So they were trained to be ladylike in every way in order to maintain their privileged status and their dignity.  They were well-dressed, cultured, educated (as they had time to learn to read and write with slaves to do the everyday tasks) and they expected to be protected by a husband with no need for real self-development.

The Civil War changed this slowly at first and completely by the end of the battle.  Faust talks first about their feelings of uselessness during these times as they did not know what to do.  Julia LaGrand explained “I am like a pent-up volcano.”  “I wish I had a field for my energies.”  Another young girl said she was a “cipher,” a zero in the great conflict.

Another great change due to the absence of men was in household structures.  Some women moved with their slaves to Texas and hired them out; however, they met with much jealousy from the Texans.  Others moved from camp to camp following their husbands as they felt they could not exist without them.  Some women moved to the city in search of rooms and employment as their resources begin to vanish.  The elite southern woman for the first time interacted with poor whites and shared living quarters with them along with catching lice and bedbugs.  This was a far cry from their plantation lifestyle.  Eventually, they became known as “Refugees” a term which was most detested by the southern elite.

Another aspect they dealt with was feeling unprotected and afraid.  The rumors of slave insurrection mounted.    They were more afraid of the slaves than the northern invader.  Additionally, enslaved people did not want to do the work of slaves anymore and the women had a hard time managing them and looking over the property.  Their feeling of anger and resentment towards the men only escalated.

These are just a few of the complications they would endure through the war.  They also fought within themselves, always feeling they had to be demure and ladylike despite all of these radical shifts in their lives which only added to their question of self-identity.  Ultimately, they would change and the old ways would die as their desire for their rights and liberty would be on the forefront after the war ushering in Women’s Suffrage.