So if you’ve been following this particular blog, you’ve noticed how relevant I think class structure is to the culmination of the Astor Place Riot. In a somewhat tabloid-y account published about the event recently after it occurred, evidence of this idea can be observed and used to back that claim.

For instance, when the “horrors of that night” are described, one of the details given is that “An aged mother found her only son, the sole support of her declining years, in the agonies of death.”

Why would the writer deem it necessary to include that part about the “sole support” ? Because it was a common situation that readers could recognize? Was it just to create a more dramatic story for selling more copies of this piece? Why would that be a dramatic detail? It can’t be dramatic unless people care about it, and people aren’t really going to care about it, unless it can potentially affect them in some way, right?

This seems like a situation that could potentially be available to members of any class, which is important when you’re trying to sell as many papers to as many people as you can. Immediately after this, though, an introduction and description of Edwin Forrest is given, that leads me to interpret this detail in a more class-oriented way.

It is a pretty favorable report of his life before the riot. We learn that “he was born in humble life, and worked his way up from poverty and obscurity to wealth and fame, by the power of genius [italics mine].” Is this not the very definition of what it means to be “middle class” in the nineteenth century?  Well, even beyond that, really. This is the basis of that whole “American Dream” idea, which is maybe why patriotism seemed to play such a big role in this event as well.

In fact, in the very next paragraph, the writer informs us that one of the reasons Forrest became so famous was because he was “puffed in all the papers as the Native Tragedian — the patriotism of New-Yorkers was appealed to.”  When the description of Macready follows, it is notably shorter and less flattering.

Almost immediately the writer conveys the story about how there was a big stink made about how he had off-handedly insulted the entirety of America by making some comment about how he couldn’t get a certain kind of arrow that he needed for a prop in a performance.  This exploded in the papers. Such sensitive patriotism! It’s as if people are SO aware of WHO they (and everyone else) are (or are not) that everyone is primed and ready for immediately being on the defensive. People are very touchy about identity, which makes sense when considering the importance given to who gets to be a member of which social class (and who doesn’t).

Here’s a picture of some “Forrest Medals.” A few included phrases? “Born in the city of Philadelphia, PA” and “rose by his own efforts”: 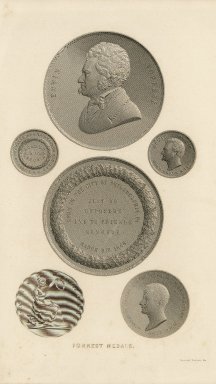